Bouncing Out Of PGL On A High Aeroball was a massive hit, particularly with the boys and they had an awesome time. Alex told us we'd be taking part in a tournament and split us into teams of two, a boy and girl in each and we came up with some team names. They were; By the end of the tournament, Aeros and ESG were in joint first place on twenty points each and so they went back on the trampolines to play for the championship title. Evenly matched Holly and Molly drew 3-3 but Nat clinched the title for ESG with a 7-5 victory over Sam. 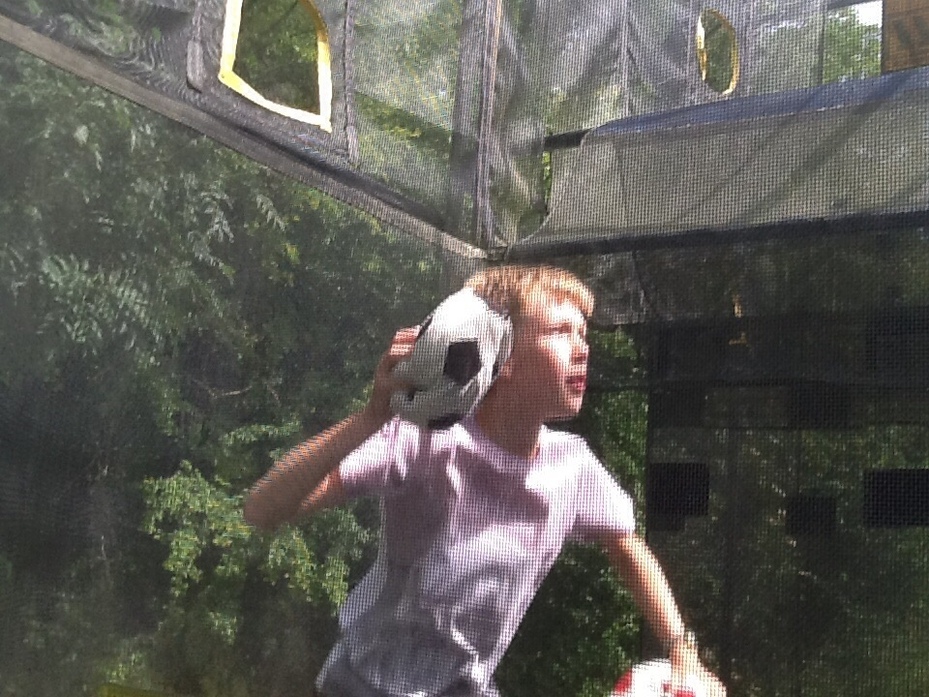 Here's what the five enthusiastic Dominator boys thought of Aeroball.....

Sam: I love Aeroball. It's been my favourite activity of the week! Best activity ever. It's even better than the Giant Swing! It's so intense.
Will: Yes. I like this one too. It's really good fun. I love throwing the ball and bouncing on the trampoline. 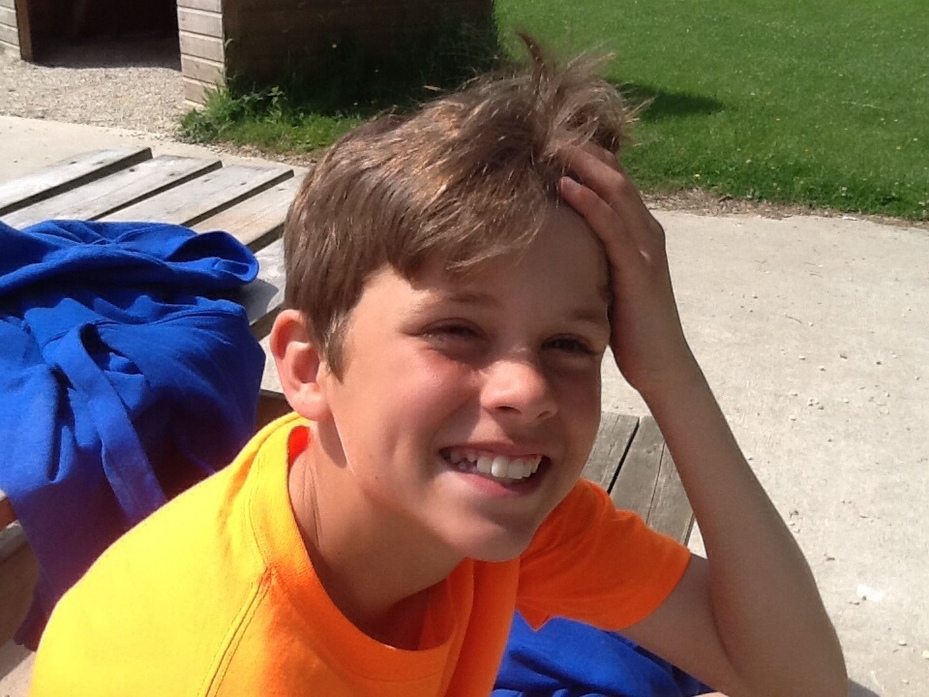 Toby: Aeroball is probably my favourite and the Crate Challenge too. They've been the best activities of the week!
Ed: It was such good fun. I love trampolining so this was my favourite activity.
Nat: Definitely my favourite activity of the week! Because I'm more of a competitive, sporty person I'm not so good with the ropes. I really like this though. You have to combine the throwing and the bouncing to throw the ball at exactly the right time. An excellent session to end our activities at PGL. Thanks for a fab morning Alex and well done Dominators!

Arriving at the crate challenge, we stepped into our harnesses for the final time as Alex, our instructor, introduced himself and gave us a safety talk. 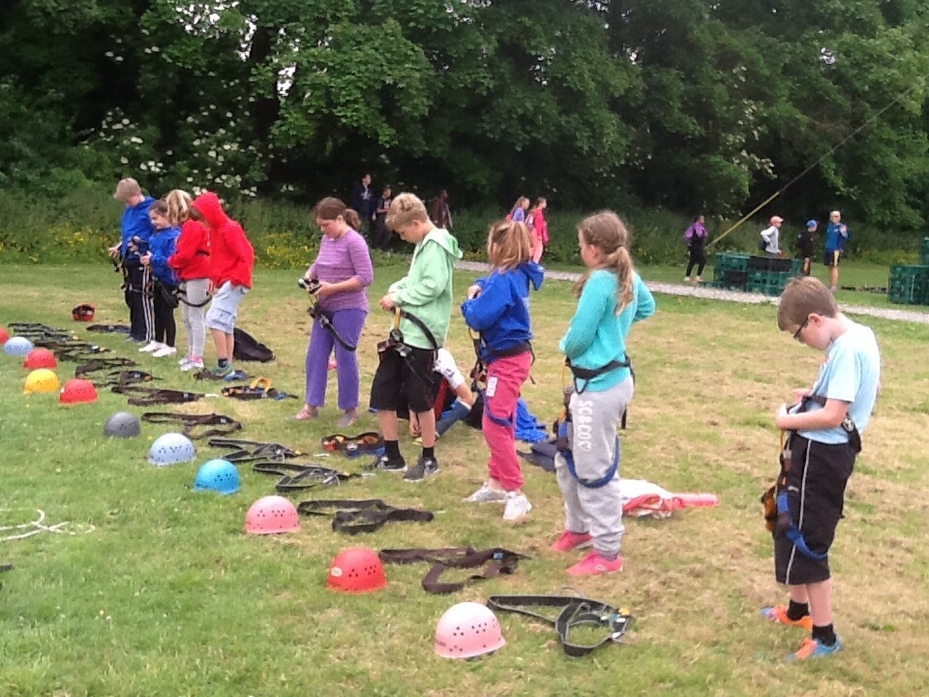 First up for the challenge were Ed, Sam and Nat. They appeared confident and excitedly prepared for their challenge. Nat climbed five crates high and Ed and Sam climbed four before Alex secured their ropes and started the timer. Mrs. Wilson and Vi worked hard to pass crates up to the boys whilst the rest of the group belayed for them. Four minutes in and the crates were starting to wobble dangerously! The boys balanced precariously on the top of the pile, gradually adding more and more crates and steadying themselves as they climbed higher and higher. After five minutes they'd done a fantastic job, building a classic crate tower, ten crates high! Good work guys and a great team effort from all of the Dominators! 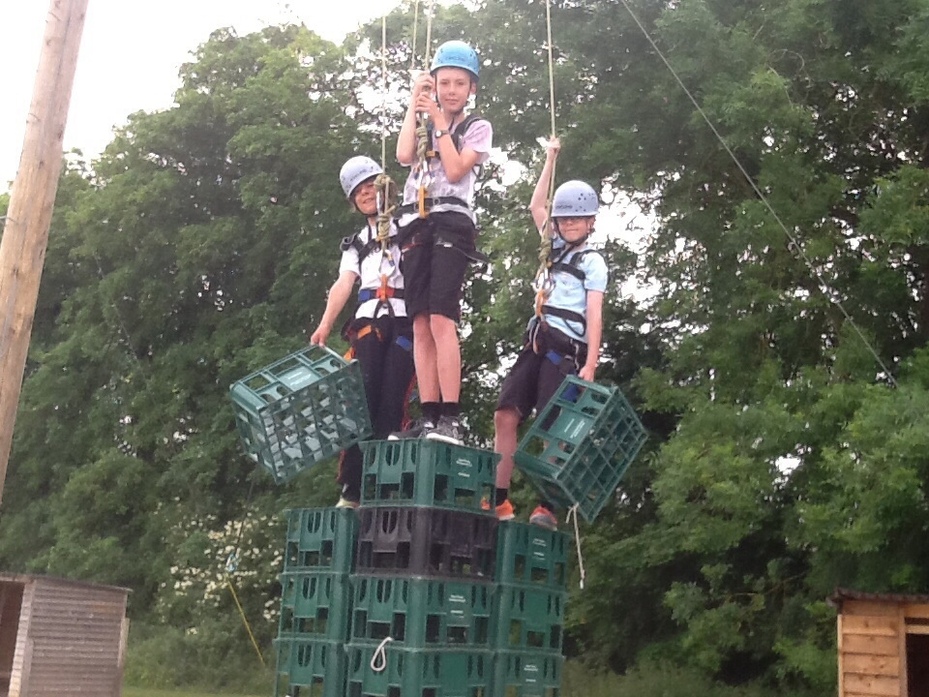 Will, Holly and Molly were next, with Toby and and Mrs. Wilson handing up the crates and the belayers shouting suggestions to encourage the building work. The tower reached the dizzying height of eleven crates, but sadly didn't survive Will, (king of the castle on the top crate), stepping off at the end. The tower finished nine crates high, the group realising that having one single high point on a tower isn't as strong as having the towers all the same height. Another super team effort though! 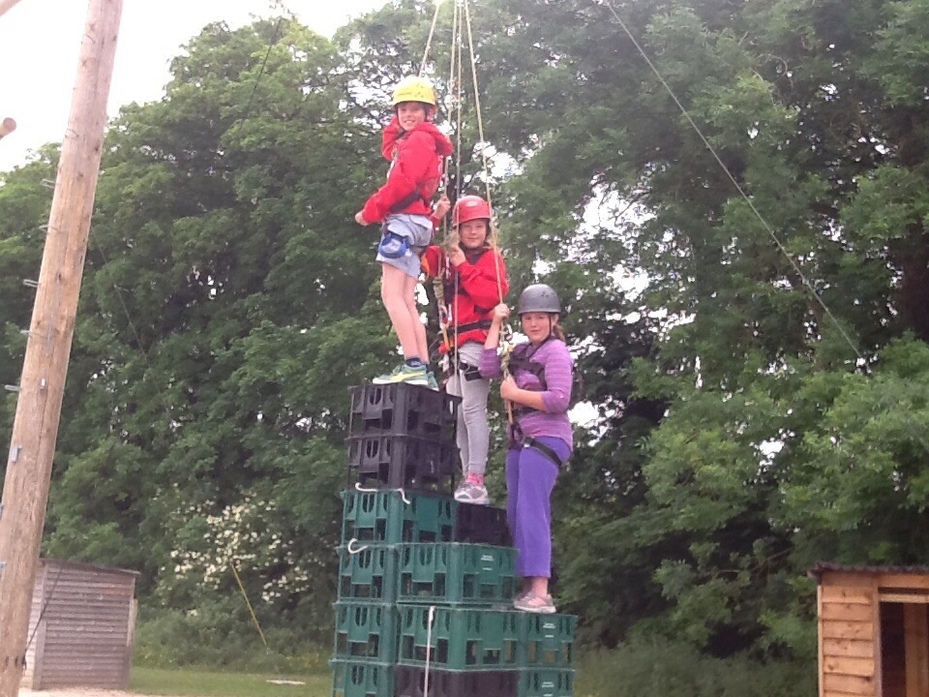 Nat managed to pass up crates single handedly (literally!) when it came to Erin, Vi and Grace's turn. They spent almost all of their turn hanging around their crate tower rather than balancing on top of it! Recovering in the closing seconds of their turn they constructed one section of their tower eleven crates high but unfortunately Vi couldn't maintain her position on top of the pile, leaving Grace the highest team member at six crates high. Toby and Mrs. Wilson discussed strategies for their climb as they waited to start their ascent. "Come on Toby," urged Mrs. Wilson competitively "Let's do this!" Spiralling upwards, they called for more and more crates to stabilise their tower as it soared towards the sky. Finishing a staggering twelve crates high, Toby carefully climbed onto the top two crates, steadied by Mrs Wilson as the final few seconds ticked by. After the buzzer sounded they cautiously stepped off the tower, taking care not to topple it as they were lowered towards the ground. After a brief wobble it was evident that the tower was solid and they were declared the winners of the crate challenge. 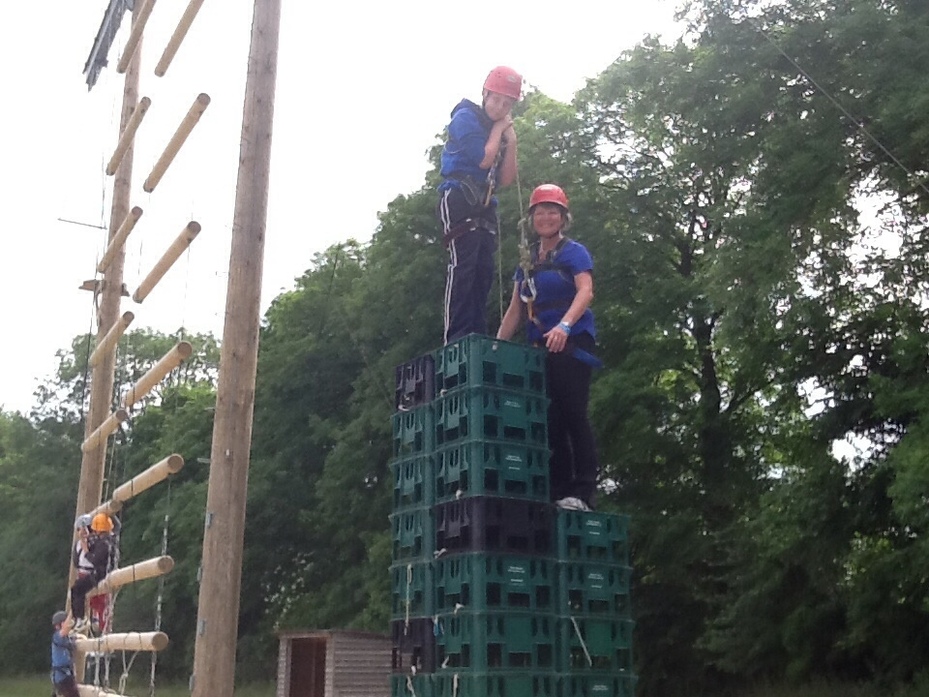 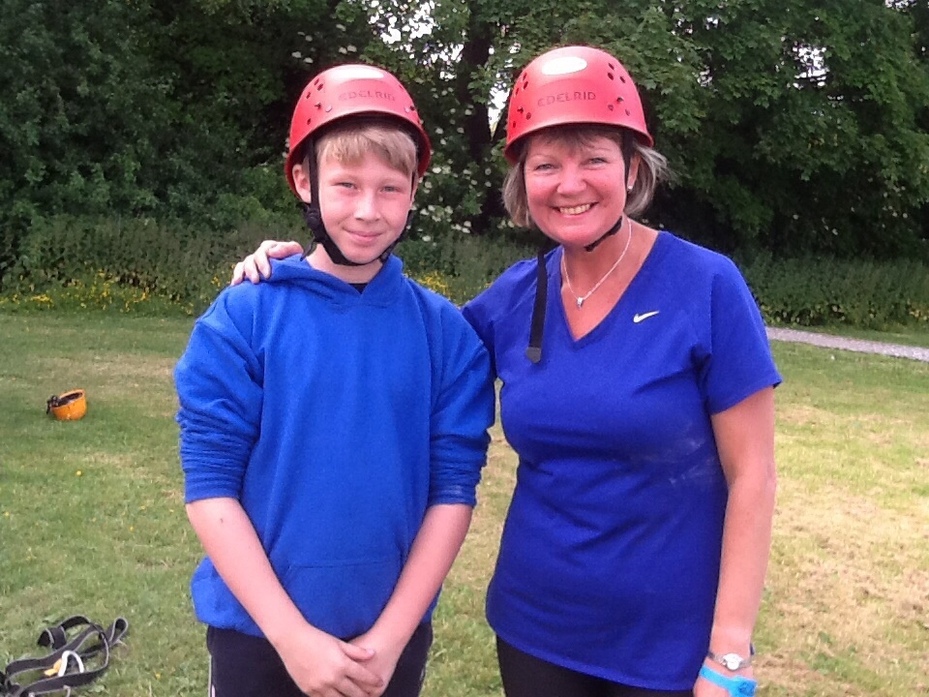 Toby, Erin and Vi were first of The Dominators on the Vertical Challenge, our last session of the day. Having reached the top of the rope ladders to complete the first stage, they were given five minutes to attempt the ascent past the tyres, climbing wall and rope net to reach the top.

Vi was the fastest girl of the day, racing to the top in just under two minutes. Toby thought the climb was fun, completing it in around three minutes and said "It felt really cool when I got to the top." 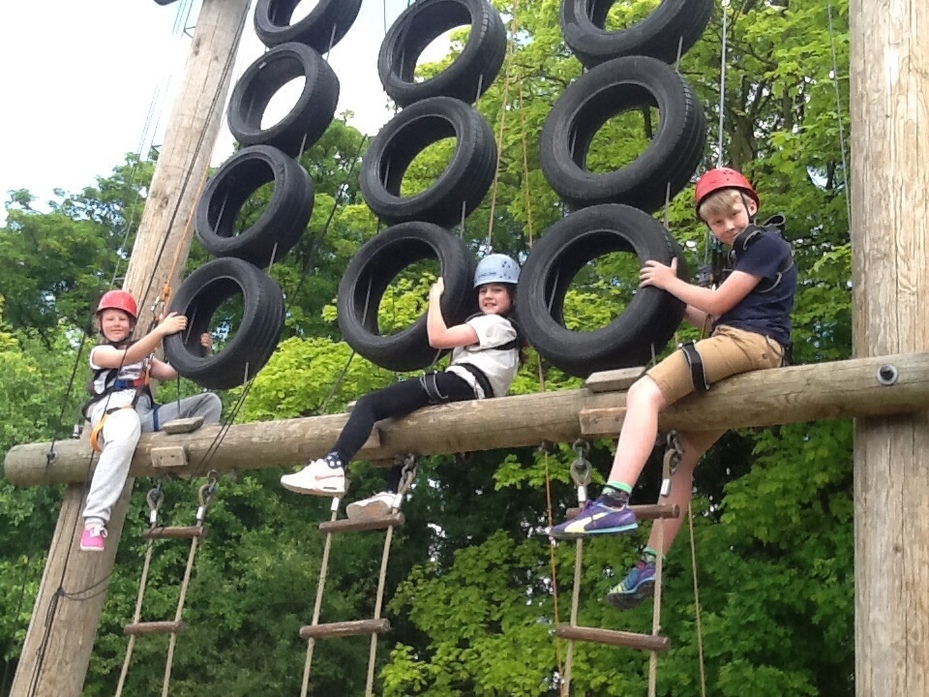 Erin, Holly and Grace made it to the top of the tyres and after initially stalling there, Grace eventually managed to secure a foothold and haul herself up onto the climbing wall before continuing to the very top! Solid determination Grace!

Once again, Molly pushed herself to the limits and then pushed a little harder. Already outside her comfort zone, she was able, with lots of encouragement from the group, to pull herself up from a seated position on the bar to a standing position. Another superb effort Molly! 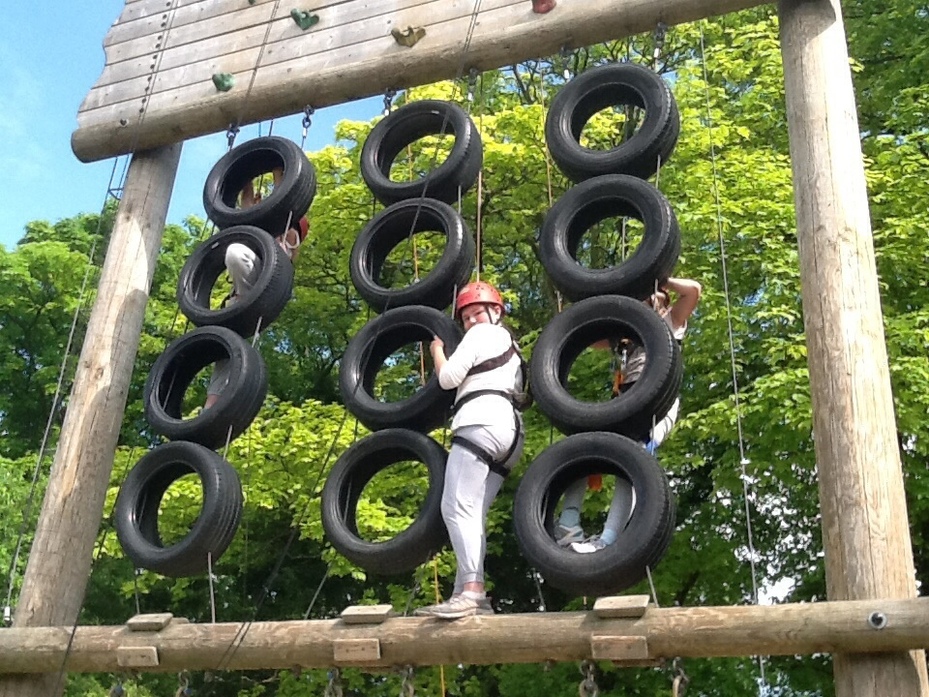 When it came to Ed's turn he moved as fast as the arrows from our archery session! He was so incredibly fast that Aidan (our instructor), had to stop him and slow him down because the belayers couldn't keep up! He was definitely our fastest boy, with his climb completed in less than one minute. Sam and Nat weren't too far behind, making it to the top about a minute later. Pretty impressive when you consider that Nat was climbing single handed again! Will took the challenge next and climbed steadily to the top, only stumbling when his knee got stuck in a tyre! Aidan told us that the Vertical Challenge climbing record is currently held by a Year 7 pupil from a different school. He explained that the record stands at 35.2 seconds and then gave Ed (our fastest climber) the chance to beat this. Huge cheers could be heard when he smashed the record in a breathtaking 30.8 seconds. Well done Ed! Well done Dominators! Well done Highnam Academy!

We all listened carefully whilst instructor Brad explained the archery equipment and stop procedures and watched closely when he carried out his demonstration. 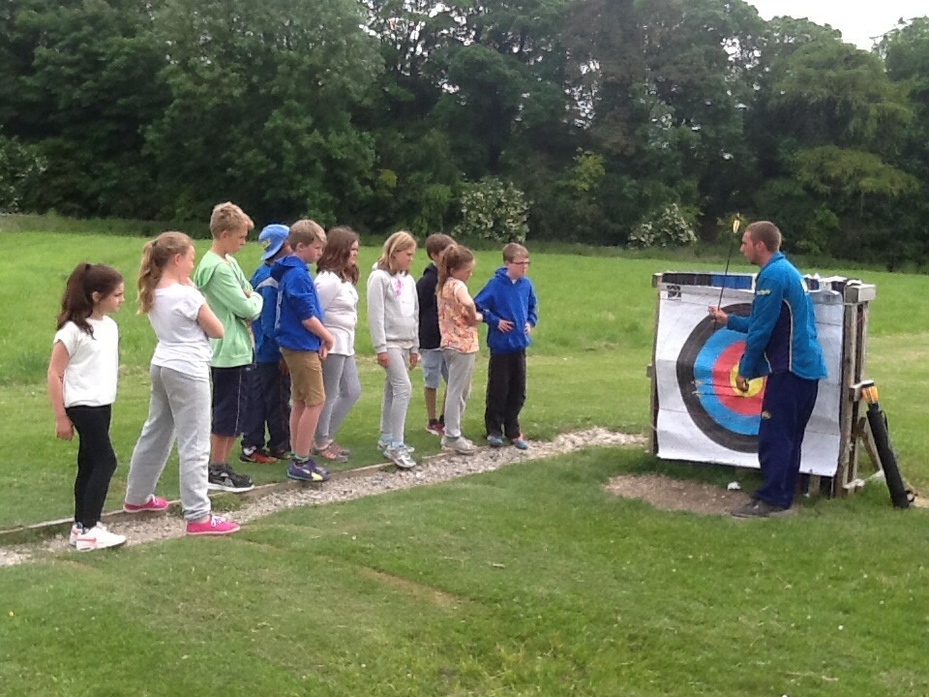 Vi shot the first arrow, narrowly missing the target but was more successful on the second and third attempts. "It's quite good!" she giggled afterwards. Erin appeared shocked that she actually hit the target (a yellow too) and Ed got a red and yellow with his first attempts. Will managed to break his first arrow but recovered with his second shot to hit the red. "This is the best activity of the day so far!" he said. Toby was very keen to get onto the archery field and show off his skills having already tried the sport several times before. He was disappointed with his first go but later went on to hit a bullseye later in the session.

Molly's first shot went straight into the red, with the second shot hitting the bullseye! Way to go Molly! "You're a better shot than me!" Brad told her! "You've certainly been listening to my instructions!" 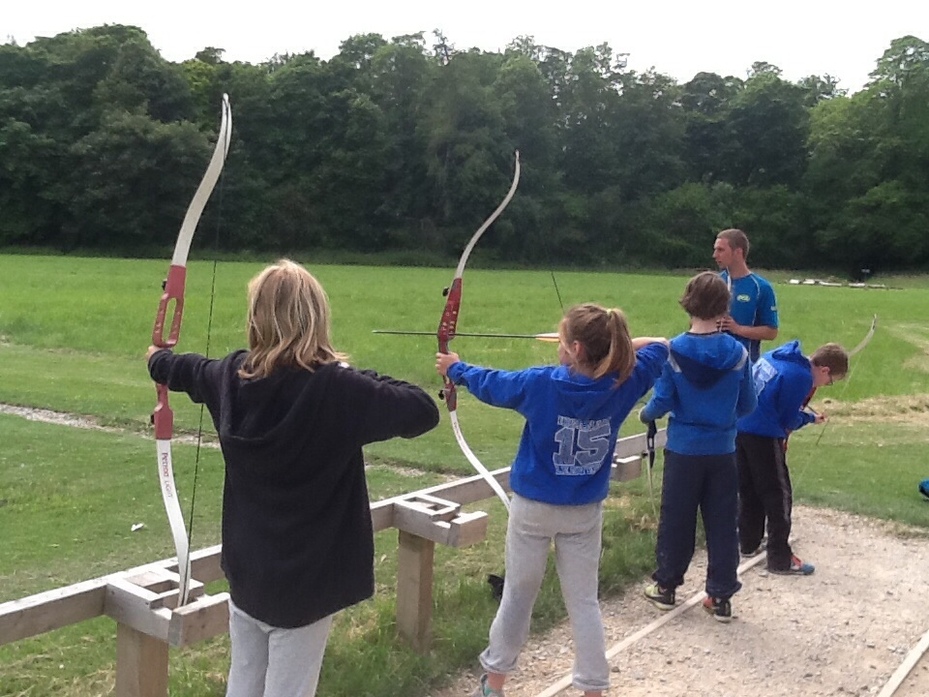 Grace narrowly missed the target with her first shot but managed to get back on track to hit the blue with her second. Nat hit two blacks and a blue, whilst Sam hit the a red, a blue and a black. Good start boys! After a couple of her arrows hit the ground, Holly listened to Brad's advice and tried hard to pull her arrow back further before releasing it. Her third arrow shot straight into the black! As the session progressed everyone's technique improved under the expert guidance of Brad and their shots became increasingly accurate.

We played a game called Save The Princess where as two teams (girls versus boys), we had to hit all of the colours in a certain order. White first (across the desert), followed by black (through the dark forest). Blue was next (sailing the sea), then red (to slay the dragon). Finally, the team had to finish on yellow to save the princess! 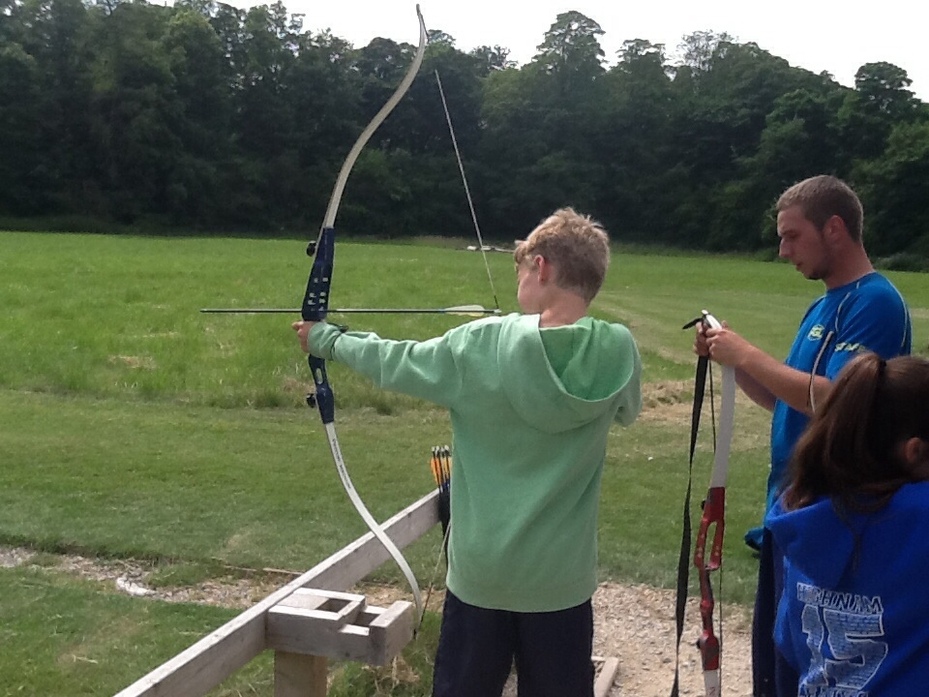 A close contest and with both teams requiring a yellow to win, the boys got extremely worried when Molly stepped up to shoot. Unfortunately, for the girls she narrowly missed yellow, landing on neighbouring red. Shortly afterwards, the boys succeeded in clinching the title with the winning shot being fired by a jubilant Will.

Here's what some of the Dominators thought of this morning's abseiling session. 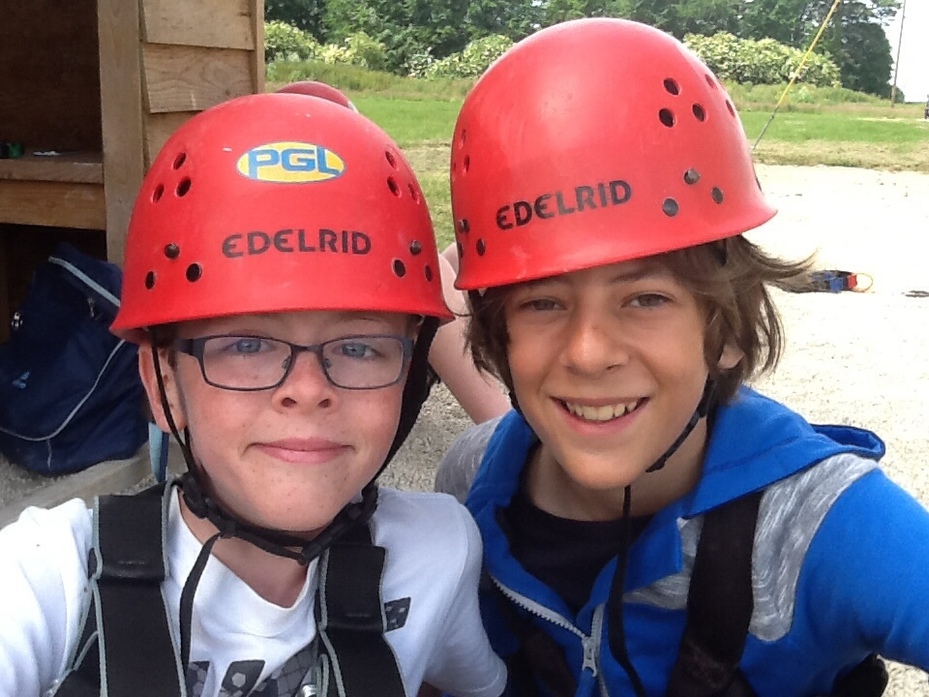 Vi - It was OK. I liked it, but it really hurt my legs when I was coming down.

Sam - Really good fun. Feeding the rope through your hands is a bit hard though. 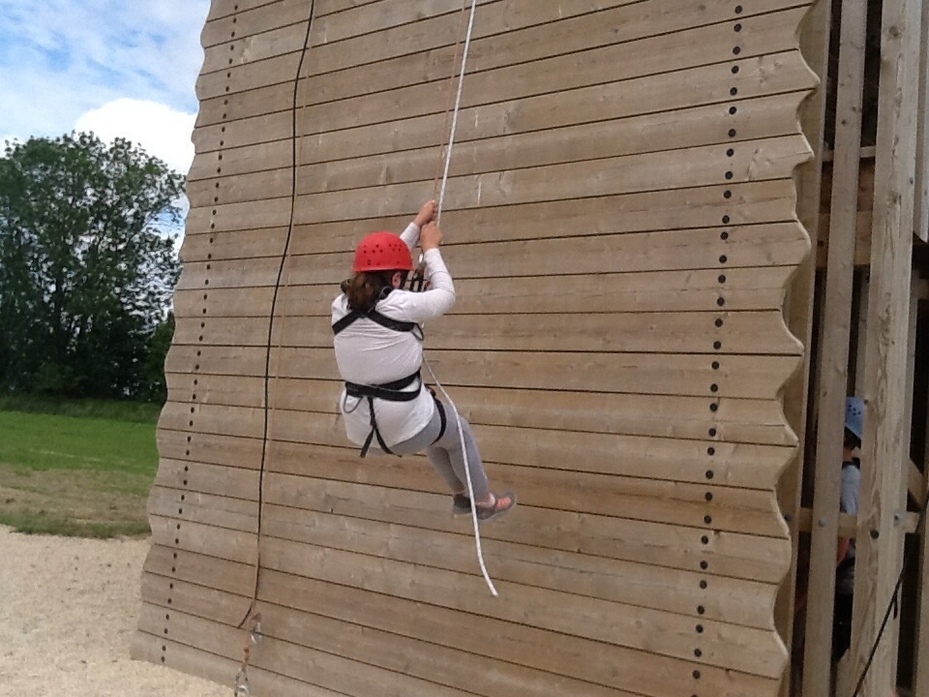 Nat - Really good fun and enjoyable. I liked how you could control your speed on the way down.

Erin - Yeah, good. I found it really enjoyable and fun to do. I didn't like hanging over the edge when Ian was demonstrating what to do though. Molly - I was really nervous at the beginning but as I got further down it got better and I wasn't nervous anymore. At the start of the session I didn't really think I' d be able to do but I'm so glad that I did. I feel really proud now because I feel I've learned to cope with my fear of heights a little bit better. My mum knows how much I hate heights and I think she will be really proud of me too!

Holly - when you look at it you think I'm never going to do that but after being given the instructions you start to think to yourself actually I think I can do it! 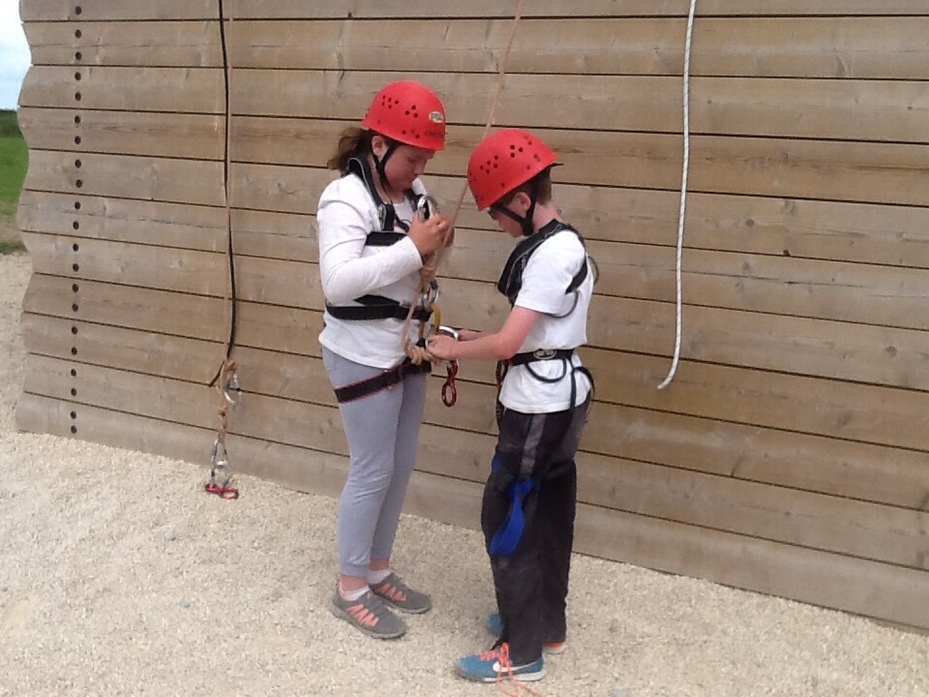 At the end of the session, Ian our instructor said "Molly was awesome coming down that tower and even doing some jumps. Then she came back up for a second go. Awesome!"