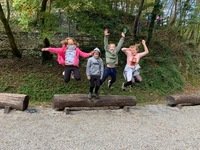 We woke up at 6am in the morning and left at 7am on a coach to visit an electric car factory near Zagreb. Excitedly, we were visiting Rimac this was the car company made the concept_one which Richard Hammond crashed in the Alps a few years ago and so there are only 7 in the world. After around 3 hours of travelling we finally got there and went to the showroom to have a look at 2 of their cars: a prototype model of the concept_2 and there were also some electric bikes which costed about 9,000 Euros. Next we saw 2 engines of which 1 of them was the engine of the Aston Martin Valcury. The two cars we saw were their concept_1 and their new one the concept_2 they are only making 8 concept_1 and will eventually make 150 concept_2. We then split into 2 groups and went off in different directions around the premises with a tour guide.

Our group first went into the technicians’ office who have a nice lounge in their pet friendly office. And then went upstairs to another office of the same stuff. We then went to see some materials that the cars were made out of it was really interesting as we found out that something that looked like it was going to be really heavy was actually really light because they were made of carbon fibre.

After that we went back to the bus and started to head to a cafe for lunch. We had three courses and we all got stuffed,  Jay and Julia “ accidentally “ went into the staff bathroom while Ollie and Ellie went into the correct bathroom. That was funny!

Next, we got back on the bus and went to a helicopter experience. It was the centre where pilots from around the world come and train how to fly helicopters. We got to try two simulators and have a tour of the sire. In the end we all enjoyed ourselves and nobody was sick which was the main thing.

“My highlight of the day was when Julia fell off her chair at lunch,” said Jay.

“The best bit for me was the cars they were awesome, the Concept 2 looks amazing!” Commented Ollie.

“My best bit was enjoying the lunch the views were spectacular.” Reported Julia .

We are now on the bus heading back to Pozega to our host families and we will catch up with you in all on our next adventure tomorrow :)