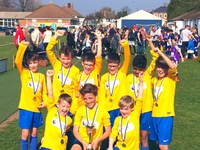 Well done to our A, B and girls’ teams who reached the GPSFA finals last weekend. The girls got off to a great start with a 2-0 win against Finlay. In the afternoon, it was the turn of the A team and they once again played Hempsted. After a very close game it was 1-1 going into extra time. Harrison scored a ‘golden goal’ in extra time which meant Highnam were crowned the winners. A super weekend of sport — thank you to our great supporters, staff and pupils.