An update from the Hartpury College Finals 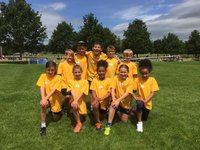 Our Year 3/4 Quad Kids team represented the school at the recent county finals. The team took the decision to represent the school even though it meant they missed out on the school trip to the Three Counties Show. The team performed extremely well and at the end of the event Lucia was awarded with a bronze medal which meant she was ranked 3rd out of the 50 girls which took part. Well done to the whole team: Martha, Lucia, Teyha, Hattie, Isabelle, Jay, Woody, Max, Louis and Oliver. We had a great number of supporters - a big thank you to all who came along to support and a big thank you to Mrs Townsend for accompanying the pupils.