An update from the Year 3/4 Quad Kids Competition 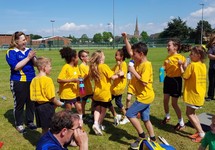 Pupils travelled to Lydney on Tuesday afternoon to take part in the Forest of Dean district finals. There are four elements to the competition: spring, long distance, howler throw and standing long jump. Highnam pupils performed very well and scored 1254 points in total. A special mention to Lucia who scored 162 points and received a gold medal for the best placed girl. The Highnam team finished ahead of Ann Cam and Primrose Hill and secured a place in the county finals after half term. Great work team!