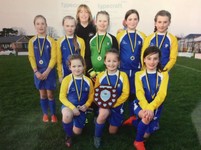 After a superb season the girls' football team were looking to finish in style with a victory in the GPSFA cup on Friday evening. The team had already won the league, indoor trophy and were county finalists but were looking to add the KO trophy to their collection. Highnam had won the cup on the past three occassions and were hoping to make it four in a row. The team played well eventually winning 3-2 after a nervy last few minutes. Thank you girls for all your hard work this season and to Mrs Townsend for training the team. Finally thank you parents and grandparents for your support over this memorable season.